What is EUMETCast?
EUMETCast is EUMETSAT’s primary mechanism for the near real-time delivery of satellite data and products. It is a multi-service dissemination system and uses commercial telecommunication geostationary satellites with DVB standards to multi-cast files (data and products) to a wide user community. EUMETCast also delivers a range of third-party products.

For instance, EUMETCast contains data and products on:

At their most frequent, these data are delivered to users within five minutes of processing.

What kind of Transmission Technology is used?
EUMETCast uses the DVB-S MPEG2 stream for encapsulating IP frames (IP over DVB). Transmission is via Eutelsat's 10A satellite (in Ku band), Eutelsat's 5 WEST A satellite (C band) and SES-6 (C band). Eutelsat 10A supplies coverage across Europe, North Africa and the Middle East. Eutelsat 5 supplies European African and western Asia coverage. SES-6 is located at 319.5º east, its tailored, high-powered hemispheric beam provides simultaneous coverage of both Europe and the Americas (see Figure).

The technology used makes it possible for end users to receive the data with regular off-the-shelf satellite TV equipment and a PC. 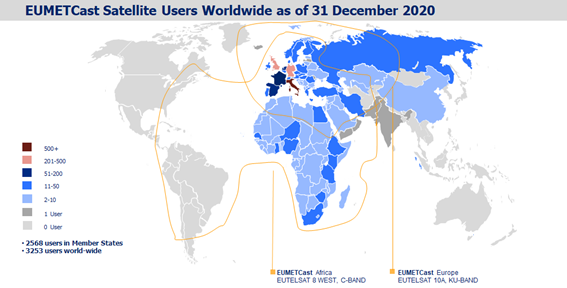 Coverage of the satellite-based EUMETCast service and numbers of users Source: EUMETSAT

CM SAF data via EUMETCast
CM SAF distributes climate data via EUMETCast since 2016. The dissemination started with data of Surface Incoming Shortwave Radiation (SIS) and Fractional Cloud Cover (CFC), and has been extended in summer 2020 with Sunshine Duration (SDU) data. All data are available within a few days of the respective observations. The following CM SAF data are distributed via EUMETCast:

All CM SAF data are provided via channel E1B-SAF-4 and A1C-SAF-4 (for more details visit the EUMETSAT Earth Observation Portal):