Release of the HOAPS 4 data record

The Hamburg Ocean Atmosphere Parameters and Fluxes from Satellite data record (HOAPS) is a completely satellite based climatology of various flux and atmospheric parameters over the global ice free oceans. A new version (HOAPS 4) has recently been released by CM SAF.

All HOAPS variables are derived from recalibrated and intercalibrated measurements from SSM/I and SSMIS passive microwave radiometers (Fennig et al., 2017), except for the SST, which is taken from AVHRR measurements (Reynolds et al, 2007). The data record includes multi-satellite averages and an efficient sea ice detection procedure. Main changes in this version are a prolonged time series, now containing data for the time period from July 1987 until December 2014, the utilisation of an updated SSM/I and SSMIS FCDR from CM SAF, the provision of uncertainty estimates for latent heat flux,evaporation, near surface specific humidity and near surface wind speed (Kinzel et al., 2017) and the implementation of a 1D-Var retrieval scheme for the retrieval of total column water vapour and near surface wind speed. Other retrieval algorithms remain unchanged compared to HOAPS 3.2 (Andersson et al., 2010).
All HOAPS products have global coverage, i.e., within ±180° longitude and ±80° latitude and are only defined over the ice-free ocean surface. The products are available as monthly averages and 6-hourly composites on a regular latitude/longitude grid with a spatial resolution of 0.5° x 0.5° degrees. Climatological maps are exemplarily shown in Figure 1. 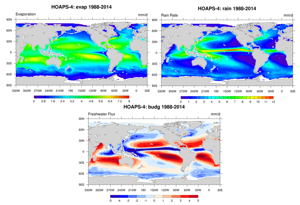 HOAPS was originally developed at the Max-Planck-Institute for Meteorology (MPI-M) and the University of Hamburg (UHH), with a first release of the HOAPS 1 in 1998. HOAPS has been successfully transferred into the operational environment at CM SAF. With the release of HOAPS 3.1 in 2009 the processing is carried out at CM SAF while scientific improvements are developed jointly at MPI-M, UHH and CM SAF. A subset of the HOAPS parameters is released by CM SAF via http://www.cmsaf.eu/wui. These parameters include:
• precipitation, evaporation, freshwater budget (evaporation minus precipitation), latent heat flux
• total column water vapour, near surface specific humidity and near surface wind speed.

Along with the data and the uncertainty estimates, a comprehensive documentation including user manual, algorithm descriptions, reprocessing layout and extensive validation studies, are provided. The documents and the data record can be accessed from the
DOI landing page https://doi.org/10.5676/EUM_SAF_CM/HOAPS/V002

The following parameters are accessible following the instructions given at http://www.hoaps.org/index.php?id=data_access