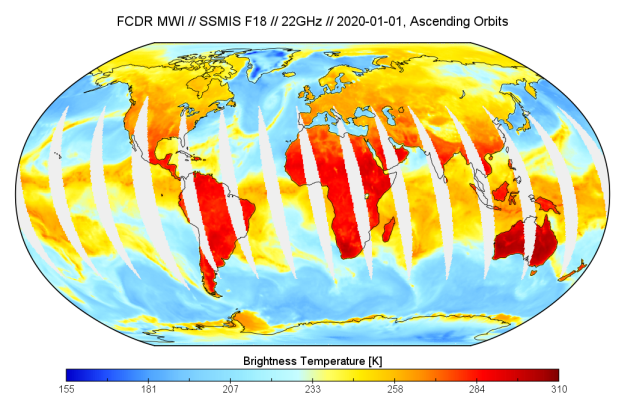 SMMR, SSM/I and SSMIS data are used for a variety of applications, such as analyses of the hydrological cycle and remote sensing of sea ice. The improved homogenization and inter-calibration procedure ensures the long-term stability of the FCDR for climate related applications. All available raw data records have been reprocessed to a common standard, starting with the calibration of the raw Earth counts, to ensure a completely homogenized data record. The data processing accounts for several known issues with the instruments and corrects calibration anomalies due to along-scan inhomogeneity, moonlight intrusions, sunlight intrusions, and emissive reflector. In addition, an adjustment to the SSMIS geolocation has been implemented in order to improve the consistency. Corrections for SMMR are limited because the SMMR raw data was not available. Furthermore, the inter-calibration model incorporates a scene dependent inter satellite bias correction and a non-linearity correction to the instrument calibration. The data files contain all available original sensor data (SMMR: Pathfinder Level 1b) and metadata to provide a completely traceable climate data record. Inter-calibration and Earth incidence angle normalization offsets are available as additional layers within the data files in order to keep this information transparent to the users. The data record is complemented with radiometer sensitivities, quality flags, surface types, and Earth incidence angles.

The SMMR and SSM/I data records remain unchanged compared to the previous edition. The SSMIS data record has been extended by five additional years. Apart from the improvement in the SSMIS geolocation, also issues with solar angle depending differences in F17 and F18 data has been identified and corrected, leading to an improved inter-satellite calibration and stability. More detailed information and the corresponding documentation on the FCDR is available from the DOI landing page (DOI: 10.5676/EUM_SAF_CM/FCDR_MWI/V004).