UTH contributes significantly to the atmospheric greenhouse effect by having a strong influence on the outgoing longwave radiation, despite the smaller concentration by mass in comparison to lower troposphere. Long-term observations of UTH can therefore be used to monitor changes in upper tropospheric water vapour loading and subsequently to infer changes in the radiative effect of water vapour in the atmosphere. 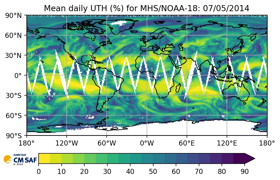 
The CM SAF UTH v1.0 data set is a mere transformation of brightness temperature (BT), measured by the 183.31±1.00 GHz channel to a more intuitive humidity unit. The relative humidity Jacobian, which is used to define the UTH, moves vertically depending on the water vapour load in the atmosphere, but in general it covers a broad atmospheric layer between 500 and 200 hPa. Observations affected by deep convective or precipitating clouds, together with those sensing the surface due to dry atmosphere or high orography, have been removed from the data set.

The UTH is available as daily mean and separately for ascending and descending orbits for each day on a regular 1° latitude/longitude grid. The climate data record covers the period from 1 January 1999 to 31 December 2015, using observations from the Advanced Microwave Sounding Unit B (AMSU-B) on board NOAA-15, NOAA-16 and NOAA-17, and the Microwave Humidity Sounder (MHS) on board NOAA-18, MetOp-A and MetOp-B.

The CM SAF UTH has been evaluated against UTH calculated from the ERA-Interim reanalysis, derived using 183.31±1.00 GHz channel BTs that have been simulated using the NWP SAF radiative transfer model RTTOV. Considering the global UTH differences between the two data sets, this analysis suggests that the data record fulfils the requirements specified by the Global Climate Observing System (GCOS) Implementation Plan of 5% measurement accuracy and 0.3% decadal stability, within ±60° latitude.