Many people felt that the year 2018 was quite dry, warm and sunny in many parts of Europe, including Germany. As the CM SAF is now generating and providing the new Interim Climate Data Records (ICDR), which consistently extend corresponding Thematical Climate Data Records (TCDR) into ‘near-real time’, anomalies can now be analyzed with high confidence.

In this respect, the sunshine duration given by the combination of the SARAH-2 (TCDR) plus extension 2016-2017 (currently under review) and the ICDR SEVIRI Radiation, has been analyzed to quantify the anomalous sunshine duration in 2018 in Europe and Germany (until end of August).

Figure 1 provides the broad view of the sunshine duration anomaly for Europe. It showns that large parts of Central and Northern Europe received significantly more sunshine hours than usual. This anomaly commonly reaches 20 to 30 %, and more than 50 % in parts of Great Britain and Scandinavia. On the contrary, Southern Europe was a bit less sunny in 2018. 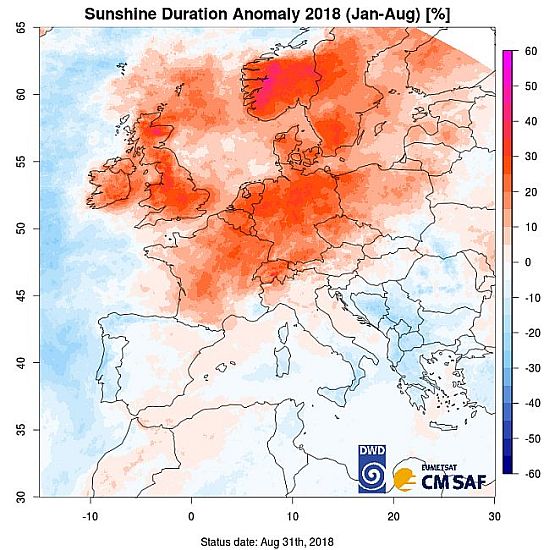 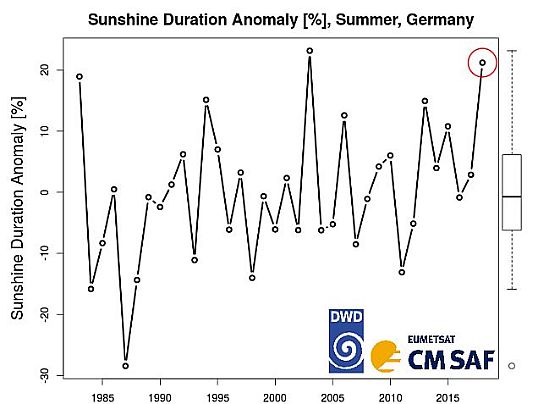 By using the CM SAF satellite products, it is also possible to look at the sunshine duration anomaly for Germany with high spatial resolution. Figure 3 shows that, even though the anomaly was positive all over Germany, there are some spatial differences inside Germany. While the anomaly in Southern Germany was moderate, parts of Northern Germany received record sunshine hours.